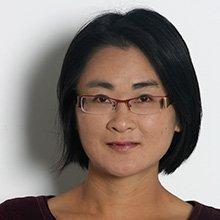 Seiko Atsuta Purdue is Associate Professor in the Fibers/Fabrics area in the Department of Art at Western Washington University.  After receiving her Bachelor of Fine Arts at Kyoto Seika University in 1992, she came to the United States where she received an MA at Montclair State University and a Masters of Fine Arts from the School of the Art Institute of Chicago.  She has exhibited widely, including participating in shows in New York City, Washington State (Seattle, Tacoma, Olympia, Vancouver, Bellingham, Anacortes, Bainbridge Island, San Juan Island), Illinois (Chicago, Evanston, and Bloomington), Canada (several sites including Montreal, Toronto, and Quebec City), Japan (Kyoto, Fukui, Kurashiki, and Osaka), Kherson, Ukraine where she received second prize at Scythia 5, and Kaunas, Lithuania at the 5th International Kaunas Textile Art Biennial, among other locations. In December 2005, she produced an art book as a 10-year retrospective of her ongoing art inquiry “Wish Tying.”  In fall 2007 she co-curated a textile exhibition, “Fabric of Identity,” that investigated the representation of identities from a number of different perspectives. In 2011, she collaborated with her colleague Cara Jaye on an extension of the wish project, “Lofty Aspiration,” a large-scale paper sculpture made for the 50th Anniversary of the Viking Union at WWU.

Much of her work is installation-based, using fiber materials (handmade paper, polyester, etc.) or ideas of fiber, seeking to connect East and West. She explores both traditional and contemporary textile techniques, as well as casting and digital media, and also involves the public in her art-making.  “Berry Grove” and “Hyoga (Iceberg)” are recent large installation works.  “Hyoga” is based on the concept of global warming and is an investigation of a landscape of melting ice using polyester and hand made paper. She has also explored the theme of motherhood in works such as “Toy Series,” and continues to work on the “Bullet Cloth” series.