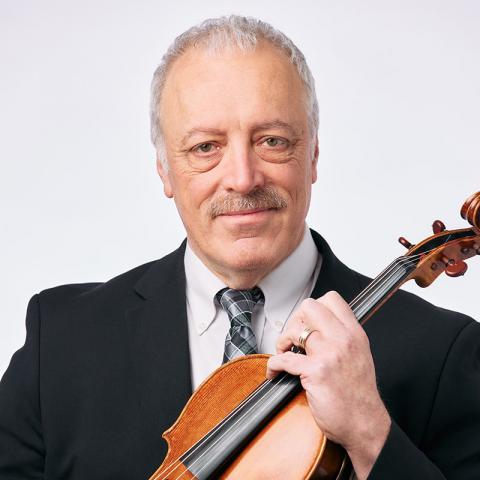 Joseph Gottesman’s performing and educational career has taken him to a wide variety of settings. Mr. Gottesman is currently Director of Chamber Music Studies at the Seattle Conservatory of Music, a division of the Seattle Youth Symphony. He has also coached for the Greater Boston Youth Orchestra and is currently the viola coach for the Seattle Youth Symphony Orchestra, Junior Division. In previous years serving as Professor of Viola here at Western Joseph also coached chamber music and conducted performances of the WWU Chamber and Symphony Orchestras. Conductor for the 2012 Rockland (New York) All-County orchestra, Joseph also has given master classes and clinics throughout the United States in solo, chamber, and orchestral playing. For ten years he served on the faculty of Chamber Music and Composers Forum of the East, in summer residence at Bennington College.

A winner of the Kahn Award for the Arts, Gottesman has toured most of the United States, as well as Central America and the Far East and was a member of The American String Project. Orchestral credits include Mostly Mozart at Lincoln Center, New York Pops, New York Musica Viva, and first desk roles for the Little Orchestra Society, the Memphis Symphony Orchestra, and the Music Festival of the Hamptons. He has regularly played in the viola sections of the Seattle Symphony, Seattle Opera, and the Pacific Northwest Ballet and is violist for Seattle’s 5th Avenue Theater. A guest artist of the Seattle Chamber Players, and the Omni Ensemble, Joseph has also recorded chamber music for the International Franz Schubert Institute of Vienna and Albany Records. He has appeared on NHK-TV's (Tokyo) The Classical Hour: "Live from Steinway Hall” and ABC-TV’s “The View”, and was described in New England Music Review of the Stamford Advocate: “Gottesman is a formidable player with a huge tone, expert skills and musical charisma.”

In 2006 he was chosen as the viola soloist for Lincoln Center’s production of Bernarda Alba and has also performed as violist for the Broadway productions of Aida, Bombay Dreams, 110 in the Shade, as well as the national company of Phantom of the Opera. Mr. Gottesman also has performed with Rod Stewart, John Denver, Harry Connick Jr, Barbra Streisand, The Eagles and many other popular artists. He has played for numerous feature film and video game scores including on-screen appearances in The Age of Innocence, chamber music in House on Haunted Hill and soloist for Child 44 (Lionsgate 2015). Gottesman studied with Berl Senofsky at the Peabody Conservatory and then took his Master’s degree from the Boston University School of Fine Arts. He was Teaching Assistant to Raphael Hillyer and studied String Quartets with Eugene Lehner of the legendary Pro-Arte and Kolisch Quartets. Joseph has been also been a technical advisor for the D’Addario string company, makers of Helicore, Zyex, and Kaplan bowed instrument strings