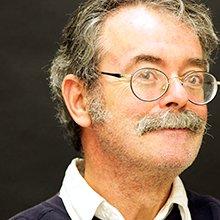 Jim received his MFA from the University of Montana, Missoula, and now teaches acting, musical theatre, and voice and diction classes as well as contemporary literature studies. He has been a WWU faculty member for 24 years. He has professionally acted at the Bathhouse Theatre, Montana Repertory Theatre, and the Skid Row Theatre. Past directing credits at Western include Cabaret, Angels in America: The Millennium Approaches and Perestroika (both parts of which were invited to attend K.C.A.C.T.F. in Anchorage, Alaska, in February 2001), Into the Woods, Fiddler on the Roof, To Kill a Mockingbird, City of Angels, The Diary of Anne Frank, Grease, Sweeney Todd, Assassins, The Happy Prince, RENT, and The Cider House Rules.