she, her, Instructor, Bassoon 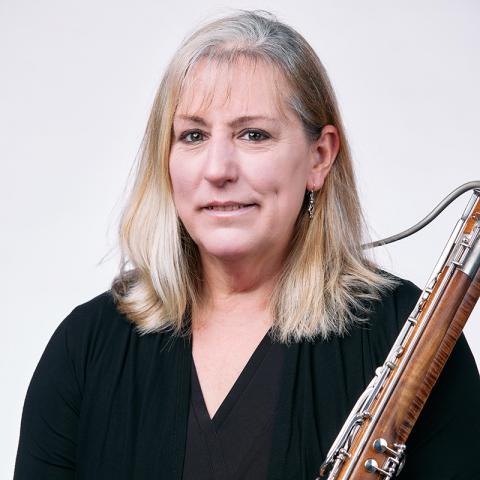 Pat Nelson is the bassoonist with the highly acclaimed Westwood Wind Quintet. Since 2001, the Quintet has released 14 recordings on the Crystal Records label. She is the Bassoon Instructor at DigiPen Institute of Technology, maintains a large private studio in Northwest Washington, and is a frequent adjudicator at regional and state level competitions.

Pat is co-founder and President of the Bellingham Chamber Music Society, presenting traditional and contemporary chamber music and premiering works by new composers. She performs with the WWU faculty wind quintet, Fifth Inversion, recently featured as artists with the Skagit Symphony and the Northwest Horn Symposium. She also performs with the Skagit Opera, San Juan Chamber Music Series, and with her New York based trio, Sapphire Winds.

Pat received a chamber music certificate from the Cours International de Musique in France and has been guest artist and instructor at Musicfest in Wales, Utah State Music Festival, Wright State University, and at California State at Long Beach. She is the winner of the National Flute Association Chamber Music Award in 2004 with her duo “Impromptu” and has performed at the National Flute Association Conference in 2004, and the International Double Reed Society Conferences in 2005 and 2012. She holds degrees from the University of North Carolina, Northwestern University with post-graduate studies at the University of Arizona. Her teachers include John Pederson, Robert Barris and William Dietz.