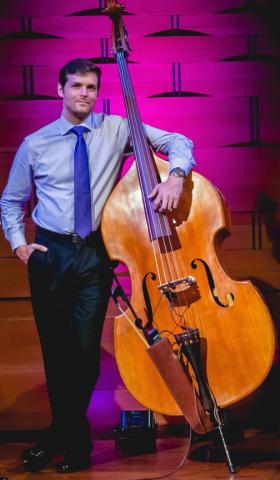 Greg started playing bass at the age of 10. He quickly realized that bass was something he would pursue for the rest of his life and was accepted to the Chicago Academy for the Arts. After graduating from the Academy, Greg was given a scholarship to attend Berklee College of Music.

Greg was very active both locally and nationally while at Berklee. He began playing with the International String Trio and performing regularly with Berklee faculty such as Bill Pierce, Neal Smith, Jon Hazilla, Doug Johnson, Rebecca Cline and many others.

After graduating, Greg moved to New York and began playing in Winard Harper's Jelli Posse. Throughout his stay in New York, he worked with legendary jazz performers such as Jimmy Cobb, Eric Reed, Eric Harland, Cyrus Chestnut, Steve Turre, Jim Rotondi, Jackie Ryan, Stephen Scott as well as continuing to tour with the International String Trio and the Valinor Quartet.

Greg moved to Seattle in 2015 to change his surroundings and currently performs with a variety of groups around the west coast. He can be seen performing regularly with Thomas Marriott, Julian MacDonough, Miles Black and other great local Seattle musicians. He also co-leads the 200 Trio which performs around the country as one of the up and coming jazz guitar trios.