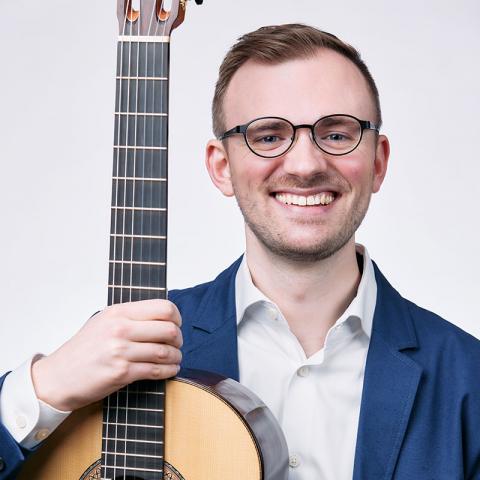 Eli Schille-Hudson is a guitarist based in Bellingham, Washington, currently serving as Instructor of Guitar at Western Washington University. He completed his education at the Indiana University Jacobs School of Music where he took Bachelor’s and Master’s degrees under Maestro Ernesto Bitetti.

He has appeared as a solo recitalist for the Northwest Guitar Festival, the Bellingham Festival of Music, the Great Spaces Concert Series, and the Lafayette Symphony Guild. A duo performance with bassist DaXun Zhang at the 2019 International Society of Bassists Convention another recent highlight in Eli’s activities as a chamber musician.

Eli remains active as a composer and songwriter, and his debut release with collaborator Ross Martinie Eiler, Signs & Seasons (2022) can be heard wherever music is streamed. Also a passionate performer of new and rarely-heard music, he has given the North American premiere of two works for solo guitar by Marcos Vieira Lucas, contributed the electric guitar part in the world premiere recording of composer Craig Michael Davis' opera Letters to a Terrorist, and regularly performs his own compositions and arrangements of repertoire from the renaissance to the present day.