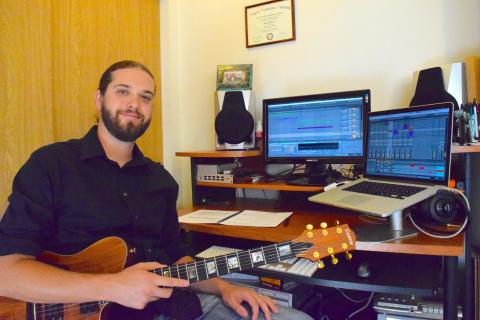 Jordan Watson is a guitarist, composer, improviser, and music technologist originally from the Bellingham area. Growing up in a musical household, Jordan began composing and playing both violin and guitar in his childhood. He went on to study music with Dr. Roger Briggs, Dr. Bruce Hamilton, and Dr. Lesley Sommer at Western Washington University (WWU), graduating in 2011 with a Bachelor of Music degree in composition. After relocating to Los Angeles, Jordan spent several years as a freelance musician in addition to being a recording and live sound intern at Swing House Rehearsal and Recording Studios in Hollywood. It was at Swing House where he had the opportunity to work with the rock band Aerosmith as they completed their Music From Another Dimension album in 2012. In 2016, he completed a Master of Fine Arts degree from the Integrated Composition, Improvisation, and Technology (ICIT) program at the University of California, Irvine (UCI) where he studied with Kojiro Umezaki, Lukas Ligeti, Dr. Christopher Dobrian, Dr. Michael Dessen, and Nicole Mitchell. While at UCI, Jordan focused on ways to create interactive music systems that allow performers, computers, and participatory audiences to perform together based on collective decision-making processes. His culminating thesis concert and paper specifically explored the concepts of social choice and voting systems and how they might be incorporated into music composition and improvisation.

Now residing in the Dallas-Fort Worth Metroplex in Texas, Jordan follows his passion of teaching music and technology to people of all-ages and backgrounds. Jordan has had the opportunity to share the same bill as many great artists––including Garaj Mahal, Vieux Farka Touré, Cuong Vu, and Wayne Horvitz––and has been featured on two releases by the netlabel, Spectropol Records. Jordan has also been actively involved in several gigging bands since 2003, including the genre-fusing groups Savage Henry, Secret Dad Trio, illogicians, and his latest Dallas-based group, Liquid Mirage. In all of his musical endeavors, Jordan strives to explore the intersections of popular, classical, and experimental musics.