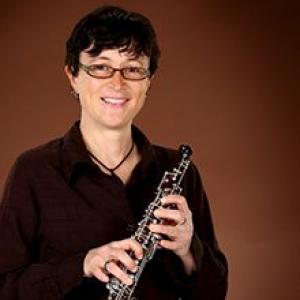 Jennifer grew up in Montreal, Canada.  She received a Bachelor of Music degree from McGill University and a Graduate Diploma from the Cleveland Institute of Music where she studied under Theodore Baskin of the Montreal Symphony and John Mack of the Cleveland Orchestra, respectively.  Jennifer’s additional training involved participation in several summer festivals in Canada and the United States, including l’Orchestre des Jeunes du Quebec and the Tanglewood Fellowship Orchestra at the Tanglewood Music Festival in Massachusetts.

Jennifer served as principal oboist with the Kingston Symphony Orchestra in Ontario, Canada, before moving to the west coast.  During her tenure in Kingston she was a member of the adjunct music faculty at Queen’s University.  Throughout her professional playing career, Jennifer performed with many orchestral and chamber music groups including the Orchestre Symphonique du Quebec, Les Violons du Roi, l’Orchestre Metropolitain de Montreal, the Canadian Opera Company, The National Ballet of Canada, the Canadian National Arts Center Orchestra, the Sarasota Opera Company, the Vancouver Island Symphony, the Pacific Northwest Ballet, the Seattle Symphony, and the Bellingham Festival of Music. Locally she played with the Whatcom Symphony Orchestra for several years and currently enjoys playing with the Skagit Opera Company.

Inspired by the natural beauty of the area and curious to explore a life that did not involve making oboe reeds, Jennifer took a hiatus from the oboe and returned to school.  She completed a degree in Environmental Science at Skagit Valley College and worked for several years in the Natural Resource Department of the Samish Indian Nation.  Unable, however, to resist her love of making music and the elusive dream of the perfect reed, she returned to playing and teaching oboe.  Jennifer is currently the oboe instructor at Western Washington University and maintains private studios in Bellingham and Mount Vernon, WA.  In 2012 she founded Making Waves, a Washington non-profit, which aims to enhance public school music programs for young people in under served communities. Though slow growing, she hopes to find more time to dedicate to this particular project in the future.  In 2013 she created Summerwinds, a summer chamber music camp for young woodwind players run through Western Washington University’s Extended Education program.

Jennifer is an active local chamber musician having discovered her love of chamber music and the rich and rewarding collaboration it entails.  She is a member of Fifth Inversion, a Bellingham based woodwind quintet and is grateful to have found such a wonderful community of musicians to work with.