Room to Grow: Theatre alum helps lay foundations for the next generation 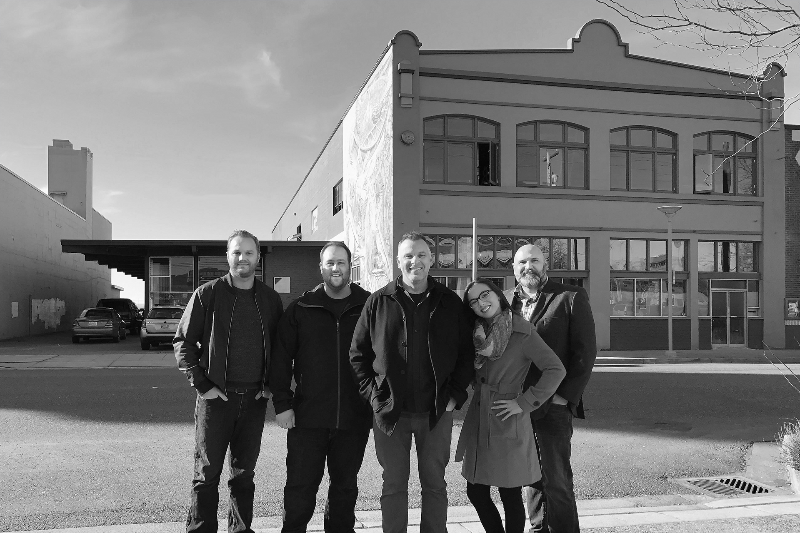 Theatre has been a treasured part of Bryce Hamilton’s life since he was in grade school. Bryce acted in live theatre continuously up to and through college, where he graduated with a double major in Theatre and English from WWU. “I started out at PLU, but it just didn’t feel right for me.” He found his home in doing theatre at Western – taking advantage of the vibrant student-led productions that are a large part of the theatre student experience here.

“I loved the New Playwrights Theatre at Western more than anything. I was most inspired by the student driven work – I did almost every student show as a writer, actor, or director,” recalls Bryce of his time at Western. At the same time, Bryce and many of his fellow WWU theatre students were producing plays in downtown Bellingham.

I think the most exciting part about the project is that five years from now, we’ll have the same mission: to give opportunity to artists to have space that wouldn’t otherwise have it.

“A lot of people were doing shows in the Allied Arts space on Cornwall Avenue, so there was a lot of intermingling.” Bryce, Nathan Smith (’01), Sean Cook (’01), and Eero Johnson (M. Ed., ’01) were doing David Rabe’s Hurly Burly with Glenn Hergenhahn-Zhao. During those rehearsals, Glenn talked about getting a longer lease in that space and starting a theatre company there.

When Bryce graduated in 2001, his passion for theatre was greater than ever. He was trying to find footing in that difficult what-comes-next phase of post-graduation. He was working for an electrical parts distributor, and for a time, living in his car. “I thought about heading to Seattle to audition and get involved in theatre companies there.” Instead, he found an outlet at the nascent iDiOM Theatre, which had been recently launched by Hergenhahn-Zhao in the Allied Arts building.

Bryce’s experience reflected that of many students and recent graduates looking for the next thing, and due to the fertile relationship among the WWU students and the iDiOM Theatre, the iDiOM became a home for many of their projects and passions.

“Western was giving the students a lot of what they needed, but the community had a whole host of complementary resources or experiences that were unique and not available on campus.” Among the things lacking then and now was adequate space to contain all the burgeoning work generated by WWU students and community groups alike. “A lot of Western students have come down to iDiOM and got the bare bones to create work and hone their craft. That one tiny room isn’t enough space to sustain that kind of work on an ongoing basis, or at a high enough velocity.”

Bryce continued doing theatre with iDiOM almost every weekend until 2004, when he enrolled in paramedic school in Portland – but he kept coming up to do work with iDiOM whenever he could make the trip back to Bellingham. “There’s an element of detective work – creation and breaking things down – in both medicine and theatre – but there’s still that moment of finding out what is crucial and delivering that,” he says of his twin passions.

In 2006, Hergenhahn-Zhao – whose background was in painting and fine art – left to study theatre in New York. He felt he needed more training and background to complement his instincts and creative drive before he could attempt something beyond the iDiOM. At the same time, Bryce had to take a hiatus from theatre. “After 2006, I didn’t do any theatre – because being a paramedic ate up all my time then – getting established and getting the training I needed early in my career.”

Both Hergenhahn-Zhao and Bryce ended up returning to Bellingham area at the same time and began planning for the Sylvia Center – a multi-venue performance and gallery space under development in the former Cascade Laundry Building in Bellingham’s downtown Arts District. They had recognized that after years of putting on multiple shows in a weekend in the tiny iDiOM space, they were getting exhausted squeezing those resources.

After more than a decade as the most prolific theater in the country, iDiOM was ready to expand beyond the walls of its first home and look for ways to offer leadership and resources to the performing arts community as a whole.

The planned center, when completed, will comprise a 160-seat theatre, a 75-seat studio theatre, a café and bar with small stage for music, gallery space, and video/photo studios. Space will also be available for events, classes, and nonprofit offices.

iDiOM will only be one of many companies lending work to the space. “Bellingham’s growth is inspiring and wonderful, but it's lacking in art and venue space – especially affordable space" reflects Bryace, "We haven’t seen performing arts spaces from a development and planning side come available. Live theatres aren’t weathering the business cycles well. iDiOM has the heart and soul of members keeping it going. We need a laboratory and a petri dish for new work.”

Bryce is now fundraising and acting as the Board President for Sylvia Center. His position with the Center is completely volunteer. Through his career as a paramedic and emergency services administrator, he’s run large budgets, written grants for fire departments, and learned board governance through fire departments and emergency medical service agencies. He’s now using those skills and his passion for theatre to help Hergenhahn-Zhao and the iDiOM family to further the future of live theatre in Bellingham.

“I think the most exciting part about the project is that five years from now, we’ll have the same mission: to give opportunity to artists to have space that wouldn’t otherwise have it.” For Bryce, that’s only the beginning. He hopes to inspire more theatre spaces and attract people with similar goals. The mission has already attracted the help and support of Wes Davis, Ron Warner, and Tera Contezac to serve on the board of the iDiOM – which will be the anchor tenant lending its 501(c)3 tax-exempt status to the project.

“We’d like to demonstrate to investors and people with cultural resources that there is more unmet demand and room for more spaces like this in Bellingham – we could build three Sylvia Centers and still need more room.”