Committed to advancing the discourse on orchestral music, the Orchestra has given world, American, and Pacific Northwest premieres of works by William Bolcom, Kaija Saariaho, Mason Bates, Missy Mazzoli, Judd Greenstein, and Roger Briggs. The Orchestra frequently collaborates with faculty and guest artists, along with the Western Choirs and Opera Studio.

Recent highlights include a performance of Hindemith’s Mathis der Maler Symphony at the National Association for Music Education All-Northwest Regional Conference; a collaborative residency with Grammy-winning pianist Gloria Cheng; a memorized, choreographed, and costumed production of Peter and the Wolf; and the world premiere of Roger Briggs’ Concerto for String Quartet and Orchestra with the acclaimed Friction Quartet.

The Western String Sinfonia gives quarterly concerts of classic and contemporary works for string orchestra, with a focus on developing fundamental skills and ensemble technique. The String Sinfonia regularly joins forces with the Western Symphony Orchestra in the performance of large-scale orchestral works.

Membership in the Western Orchestras is by audition, and is open to the entire Western campus community. For more information about the Orchestral Program at Western, please contact Dr. Ryan Dudenbostel, Director of Orchestral Studies. 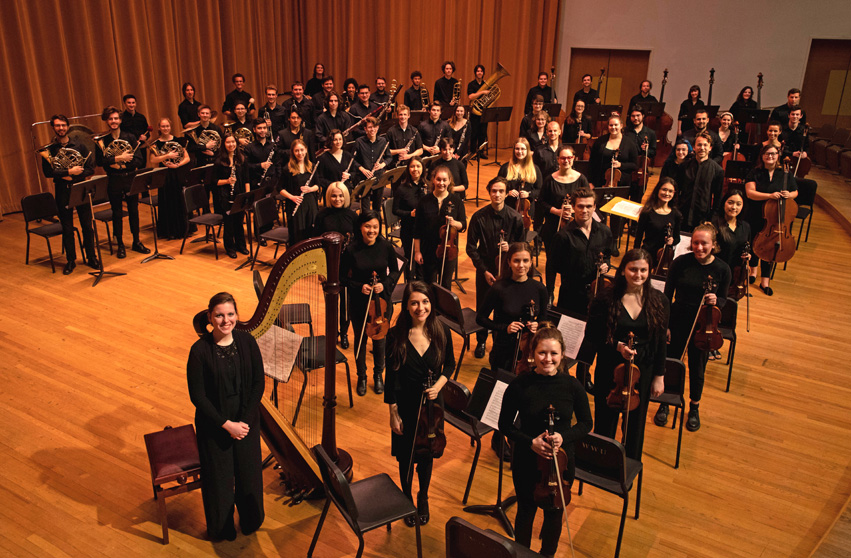 In June of 2020, 47 members of the WWU Symphony Orchestra will embark on a six-day, eight-night performance tour of the musical capitals of Prague and Vienna. On their concert programs, the WWU Symphony will be giving the world-premiere of Gideon Klein's (1919-1945) Chamber Symphony.

A Jewish composer of Czech heritage, Klein was among hundreds of prominent artists imprisoned at Terezín—a sort of model camp used by the Nazis to deceive the world about their treatment of Jews and other prisoners—before being murdered at the Fürstengrube concentration camp shortly after his 25th birthday.

Among Klein's Terezín compositions is a three-movement Piano Sonata, which will be presented for the first time in a new adaptation for orchestra on this tour. This represents a significant contribution to the discourse on Holocaust-era music by Western students.

Following concerts in Prague and Vienna, the tour will culminate in a festival performance at the Golden Hall of the Musikverein, one of the world's most hallowed concert halls, in celebration of Ludwig van Beethoven's 250th birthday.

For a young musician to perform on a stage shared by such luminaries as Brahms, Bruckner, and Mahler is the opportunity of a lifetime.

Sergei Prokofiev: Peter and the Wolf, choreographed by Pam Kuntz