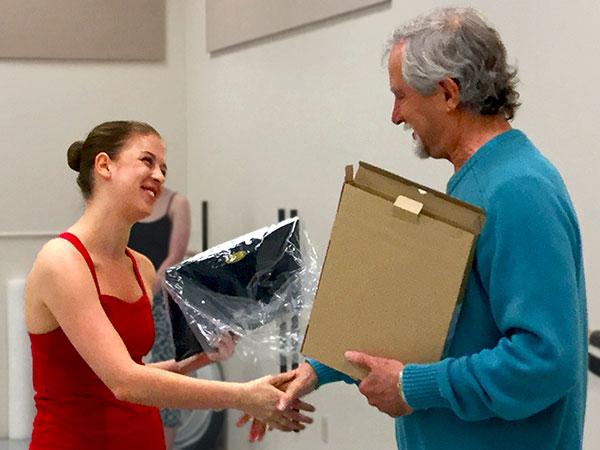 Katherine Mullen came to WWU in 2014 from Whatcom Community College as an honors student to do a double major in Dance and Sociology. Her international travels and her work in Dharamshala, India with Tibetan refugees have truly set her apart.

She has spoken about her experiences with Tibetan refugees with students in Fairhaven Middle School and at the Seeds of Change conference. She has volunteered at the Lighthouse Mission and Growing Veterans. She is a harpist with a touring Celtic music group. She has received many scholarships at WWU including the President’s scholarship. Her recent outstanding speech from the annual WWU Scholarship dinner was brought to my attention by another student who just couldn’t say enough about it. She brings such a presence to everything she does.

Katherine has been extremely active since coming to WWU Dance - performing in five Performing Arts Center Mainstage performances and five student performances on top of her dance and sociology degree classwork. In addition to her recent performances in Carmen with the Pacific Northwest Opera, I’ve worked with Katherine as a rehearsal director for our European guest choreographer, Joachim Schloemer, an intense two-week residency that resulted in a 30-minute piece. She also performed in my choreography for Dance in Concert, inspired by studies of the Natya Shastra -- an ancient performing arts text in India.

Her teamwork, her work ethic, the creativity she brings to her work became really evident in Schloemer’s demanding rehearsals. Schloemer was training the dancers in so many types of work during the whole process, and he really loved working with Katherine. Everyone wants to work with an intelligent dancer, and Katherine is that. She is a team player and her inner beauty and intelligence always shine through her movement.